Once there was an island, and on that island there lived three cousins… 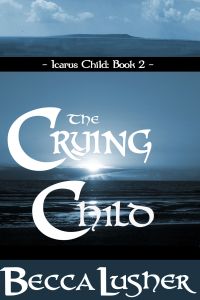 The Sisters of Icarus may all be gone, but the next generation remains. Bitter, half-selkie and broken, the three women are different in many ways, yet one thing connects them: the island and its quest for a new Icarus.

Ghosts and family, selkies and betrayal, love and loss, these cousins are on a journey that will change all of their lives. And when the stars fall nothing will ever be the same again.

For there will be a new Icarus – the island will accept nothing less.

No matter what the cost.

The Crying Child in Brief
What’s in it?: A 78,000 word novel (around 246 pages)
When is it set?: 142-141 BC
Where is it set?: Iron Age Britain, pre-Roman.
What kind of story is it?: A family drama between three cousins, involving jealousy, love, friendship, betrayal, selkies, lots of chores, ghostly goings on and general island creepiness.
What’s the genre?: Historical Fantasy.
Any age restrictions?: Not really. Although it is more geared towards adult themes, such as childbirth, romance, jealousy, etc.

Behind the Story
This used to be the middle section of the original Icarus Child story, and was the part where not a lot happened, except for the island being creepy and characters being miserable. So this time around I wanted to do things differently – starting with Callirye and her little romantic interlude. In the original that was all dealt with in barely a paragraph, but this time around I wanted to know more about her. Especially as in this version she’s Cana and Fox’s daughter.
While I was expanding her story, the island was going behind my back and changing other things. So, if you’re one of the unfortunate people who read the original version on Elfwood around ten years ago, this version is quite a bit different. It’s also made my life very difficult for the last part of the trilogy, but that’s the island for you.

Extras
The original dedication for this book was a bit long, so I cut it down rather drastically. However, since I wrote the long version for a reason I thought I’d include the full thing here.

Whether big or small, near or far, close or distant, family is the one thing that is always there.
By blood or friendship, bound by shared memories and experiences, real family will never let you down
– or if they do then they are the ones worth forgiving.
They know your worst secrets, drive you to tears and infuriate you as nothing else can, but they also make you laugh, sing all your favourite songs and share in those awful movies that no one else will watch with you.
Family is the hearth that warms the soul.

May your family be strong and your friends be family.

Read on for the opening chapter from The Crying Child, and be aware that it may contain spoilers for Sisters of Icarus.

ONCE THERE WAS an island, strange and small, only a short way from shore. Yet somehow that dull-seeming slice of rock grew stories as abundantly as a tended field bore wheat. Tales of demons and ghosts and restless spirits woven deftly with madness, strange rituals and a coven of females that cursed any man who looked upon them.

Three, there had to be three, and they were called the Sisters.

Yet they weren’t sisters at all, as the folk on the mainland knew. For they remembered Crazy Icarus and his three sisters, who really had all been born to the same mother. Away from those facts, though, the stories took over. Crazy Icarus had succumbed to the curse of the island and thrown himself to his death on the rocks. No, no, he had been driven mad by the powers of his sisters. Still, no, it was his sisters’ black curses that caused him to cast himself from the rocks. Or had turned him into a bird. Or had frozen him into stone. Or had transformed him into the restless wind that endlessly cried his name.

Stories, rumours, lies, myths, legends, the island threw them out over the mainland like sea spray after a storm.

What was stranger still was that one of the original sisters remained alive. But not on the island. No, the last of sister of Icarus lived on the mainland, while three young women inhabited the island. Cousins, not sisters, for all that they were called that anyway.

Few on the mainland had ever seen them, for they kept largely to themselves, but that didn’t stop folk from speculating, imagining, dreaming up strange ways and fates for them all. The oldest, they said, was tall and blonde and beautiful but cold, so cold. As her mother had been. Mainlanders remembered the time when Michra had lived amongst them, how proud and silent she had been, so much better than the folk around her. Her hair had been dark, but her daughter was fair.

They called her Winter.

Then there was the second child, the one whose mother had never been seen by the people in the trading settlements. Yet this child they had met, or rather glimpsed, swimming to shore. Small and dark and secretive, they claimed she could steal a man’s soul with only one glance from her sea-shade eyes. And when she sang, honest life-mates were lost to her spell.

They called her Selkie and both feared and longed for her presence.

The third child was a mystery. Her mother lived on the mainland along with her wandering soul of a life-mate. They had other children – three more daughters born on the island, and a final, surprise son who appeared once they settled on the mainland shore. But one child had remained behind. Some said she was dark like her mother, others claimed her red-haired like her father. Some said she was bright and capricious like a woodland sprite, others claimed her as deep and fathomless as the sea.

No one really knew, so they filled the gaps with imagination and envy.

They called her Ghost, since she was known to exist but never, ever seen.

Until the day she came to shore with Winter by her side, and two of the Sisters left the island to travel on the mainland. None knew what they were searching for, though some suspected and plenty claimed that they alone knew the truth.

Yet it hardly mattered what their true intent was, because what they found was something no amount of tales, rumours, lies or imagination could dream up.

2 thoughts on “The Crying Child”