Life in my garden is very green right now, bursting with life and buzzing with insects. For the most part I’m not a particularly clever gardener. I don’t remember the names of things, I tend to “rescue” plants from the sale sections of garden centres and hope for the best, and I’m very Darwinian in my planting scheme (stick ’em in, if they’re tough they will survive). On the whole, I prefer to stick to native wildflowers or things that I know bees and butterflies love. Occasionally, very rarely, I’ll pick something just for me. 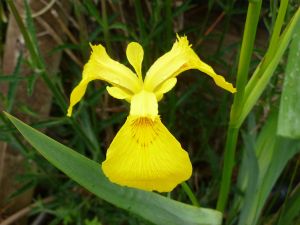 It’s not much of a pond, just a half barrel in the corner of the garden, mostly taken over by duckweed, but every other year the flag irises decide to break through the green and put on a show. Only one is flowering this year, but it seems to be making up for it with the sheer number of blooms it’s throwing out. Three so far, with at least three more to go. They only last a few days, but luckily there’s always another waiting.

Speaking of irises, this is one of my garden centre rescues. I have no idea what type it is, it was in the sale as a gorgeous pale blue bloom, so I snapped it up and every year I think it’s died and instead, out of nowhere, I’ll get this gorgeous fellow.

Sometimes the pale blue one comes up too, but since I only spotted this bud yesterday, I’ll have to see if the other one makes an appearance. Yesterday this was just a green shoot with a purple tip. Isn’t it lovely?

The sad thing about irises is that they never bloom for long, and when they’re done they mostly vanish. Which is why I’m always so delighted when these ones keep coming back, year after year.

A bit like this evening primrose. I found it in Wells last year, when I met up with my sisters in search of where our great-grandparents are buried. (And to see my nieces and nephews.)

Anyway, I saw this outside the Bishop’s Palace café and thought it was lovely. Had no idea what it was, but brought it home, planted it up and figured out it was an evening primrose. The flowers only last a day or two, but as you can see in the picture there are plenty more buds waiting to open. It flowered non-stop for about five months last year, then vanished entirely over the winter. I’m so pleased my mystery bargain came back! 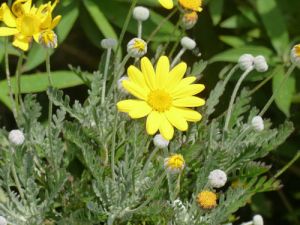 This is another mystery buy, some sort of daisy thing, but it’s a great big bush now that’s picked out its own little niche beside the buddleia. Every time the poor thing opens a flower it seems to get eaten, but it ploughs on regardless with bloom after bloom after bloom all through spring and summer. It first came out in April – which is a little late, as most things are this year – but it’s going stronger than ever right now.

It’s right at home alongside the buttercups. These ones in the main garden are doing considerably better than the ones in the wild garden, which are getting eaten by the mega slugs, who will eat everything they can, alas.

The ox-eye daisy has also just made a reappearance. I love how cheerful these flowers are. Big and brash and sunny – the bees and hoverflies seem to like them too. Haven’t seen any butterflies on them yet, but then butterflies are pretty scarce in the garden so far this summer.

Here’s another of my rescues. It was in the end of season sale and I felt sorry for it. Besides, not only do I like geraniums, but it’s an Orion something or other – I couldn’t leave it! This is another that I think has vanished when I go looking for it each spring, but it always bounces back in the summer to surprise me.

Elsewhere in the garden the violas and red campion are flowering like mad, the bluebells are gone and replaced with nettles and the sea holly seems to be flowering small this year and doing better than usual.

When I stepped out for lunch the other day, I watched a female house sparrow on the seed feeder, fluttering back and forth across the garden, while her lazy brood huddled in the prickly pair, fluttering and begging whenever she came within reach. They’re as big as she is, and since they had to have flown to get into the pair, the least the lazy so and sos could do was flit the tiny distance to the feeders themselves. One of the feeders is practically in that tree now, it’s spread so much since spring.

Ah, such are the delights of a green and beautiful summer. I hope things are as pretty where you are, or at least have spaces where you can breathe in something clean and remember the beautiful days.

I’m having a pretty productive week away from the garden. I’ve finished the second Regency book, which is only a novella, and started a third. They have titles now too. At some point I think I’ll have to make myself a new author website, since these will be released under a pseudonym. Still, the writing is going well, the weather is glorious and I survived my solo-driving trip to Wales.

May your own week be going so well.