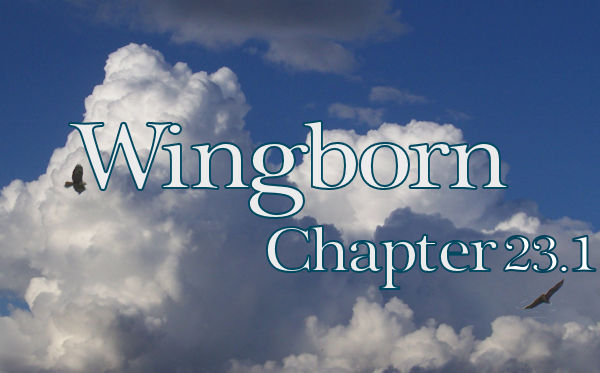 And after the way things ended last Sunday… I’m just going to shut up and let you get on.

Although if you need a refresh, the last line was about grabbing hold of Cumulo’s tail and lunging –

STRAIGHT INTO HURRICANE, who caught the kaz-naghkt full in the face with his talons.

Freed, Cumulo needed no further urging. There was time for one snatched breath before he folded his wings and entered the darkness beneath the bridge. Mhysra huddled against him, wondering if her heart would ever recover. The shadow seemed to go on and on as they dropped closer to the water, their momentum lost after the kaz-naghkt had grabbed them.

Sunlight blinded her on the other side and air surged beneath Cumulo’s wings again as he banked upwards, swinging back towards the citadel. He flapped hard to lift them over the eyries, now swarming with miryhls and kaz-naghkt. A familiar eagle appeared through the chaos, its wings tipped with silver.

Keeping an eye out for attack, Cumulo glided closer and, when Latinym was directly overhead, Dhori dropped a bow and quiver into Mhysra’s hands.

“Luck!” he called, Latinym already racing back to the fight.

“I think we’ve already had more than our fair share today,” Mhysra muttered, securing the quiver to her saddle before testing the balance of the pre-strung bow. It was perfect. She frowned and wondered how Dhori had managed to bring hers to her. Where had he gotten it?

“The gods can spare us a little more,” Cumulo shouted. “Wake up!”

Blinking, she looked up and found they had company. Three kaz-naghkt screeched down the wind, outpacing the miryhls on their tails. If they got too close, a kaz-naghkt would twist and lash out with its tail. Spotting Cumulo, they grinned and stooped to attack.

Mhysra drew an arrow from her quiver with shaking hands. “Steady,” she called, and Cumulo levelled his wings calmly, as if they faced murderous kaz-naghkt every day.

“Maegla aid me,” she whispered, aimed at the kaz-naghkt on the left and released.

The wind snatched at the arrow, driving it away from the pale chest she’d aimed for and striking the thick muscle beneath the kaz-naghkt’s right wing instead.

Shrieking, the creature curled around the wound, swinging its broad left wing across. The kaz-naghkt next to it lashed out as a leather sail clouted it in the face. Black blood sprayed and the wounded creature fell, injured in both wings. While it could have easily recovered from an arrow wound, there was little it could do with its other wing in tatters.

The kaz-naghkt that had done the damage shook its head, too dizzy from the slap to spot a miryhl dropping on it from above.

As they battled, the final kaz-naghkt continued onwards, flexing its claws. Wings spread, holding steady, Cumulo waited for Mhysra to nock another arrow. Her hands were shaking and it was all she could do to draw. She released too early and cursed when the arrow went harmlessly wide.

“Hold on!” Cumulo warned, and she gripped her bow in one hand and grabbed the saddle with the other as her miryhl dropped.

The kaz-naghkt screamed with glee and swooped after them, wings tucked in tight. It screamed again when Cumulo rolled over, grabbing its torso and face with his thick talons. Claws scrabbled, trying to reach the miryhl’s belly, but Cumulo thrust his legs out, completed his roll and dropped his prey. The body tumbled and struck an outcrop; a black smear on grey granite.

While Mhysra watched it fall, Cumulo took them back to the fight, far more prepared than she for what they faced. “Stay with me,” he called, sensing her distraction.

Her voice failed when she tried to speak, so she licked her lips and took a deep breath. “Always,” she croaked, checking her quiver with shaking hands to make sure none of her arrows had been lost in their tumble. She checked her safety straps were still nice and tight, selected an arrow and shrugged her bow into her hand, ready for whatever came next.

LYRAI PAUSED TO wipe the sweat from his face as Hurricane circled above the battle. His right arm ached. It had been too long since he’d last fought, but this was what he’d trained for, had gotten so good at and been denied when he was grounded. Now he had Hurricane and was a true Rift Rider again – but it had never been like this with Froth.

Hurricane tensed and Lyrai leant against his back, holding his sword close and ready. They needed no words to know what the other would do next or where each wanted to go. This miryhl had been born for him, Lyrai could feel it in every tilt of Hurricane’s wings as he darted between scraps and fell talons-first on the tangle of kaz-naghkt gathered around Stirla.

While his miryhl battled, Lyrai brandished his sword, catching the first kaz-naghkt by surprise as he swept off its tail. Unbalanced, it struggled to turn and was impaled on Stirla’s sword.

Lyrai swung again and again, defending them on all sides while his miryhl fought. Most of the kaz-naghkt fled, seeking easier prey, while the less fortunate were already in Atyrn or Hurricane’s talons.

Another creature banked overhead and dropped towards Lyrai, claws outstretched. Bracing himself, Lyrai raised his sword and swung, slicing through one arm and catching the kaz-naghkt’s other shoulder. Hurricane stuttered at the impact before Lyrai diverted the kaz-naghkt’s weight downwards. It snarled, battered but by no means dead.

Licking its bloodstained lips, it smiled as fresh skin, bone and muscle writhed and crawled out of the severed stump. Knowing what was to come and what he had to do, Lyrai adjusted his grip on his sword and hauled.

Still attached to the lieutenant through its shoulder, the creature keened. Lyrai pulled again, bringing the writhing creature within reach. It sank its claws into his leg and opened its mouth to bite, but the angle of the sword restricted its head and it couldn’t quite reach.

Jerking his knee up, Lyrai shoved the kaz-naghkt off the blade and exposed its chest. Then he struck. His sword cleaved through the exposed flesh with ease, stopping only when it reached the scaled skin on the other side. The whole weapon juddered as the kaz-naghkt’s heart pulsed. Twisting his wrist, Lyrai braced his foot on the creature’s shoulder and pulled his sword free. The kaz-naghkt screamed and dropped into the river.

One less enemy to worry about.

“Are you wounded?” Stirla shouted as Atyrn circled counter to Hurricane.

Lyrai pressed on the puncture wounds in his thigh and cursed, forced to sheath his sword as he shrugged out of one side of his flying jacket. Using his belt knife, he cut through his shirtsleeve and dragged the material off, before pulling his jacket on again. Slicing the sleeve into strips, he bound his thigh, wadding material over the worst of the wound and tying the binding as tight as he could. It wasn’t perfect, but he wasn’t going to retire from the field now. Not when they were still needed.

“Fine!” he shouted, patting Hurricane’s neck when his miryhl glared at him.

Satisfied, Stirla raced back into the fray, aiming for an oversized kaz-naghkt who was causing a bunch of Riders a mountain of problems. Knowing he had the situation well in hand, as Atyrn hit the creature from behind, Lyrai urged Hurricane up high.

They weren’t alone up there – Captain Myran circled the battle, shouting orders and guiding Riders into place. Several archers also surveyed the fight, picking off targets. Hurricane was heading towards the captain when something else caught Lyrai’s eye.

“Maegla blast her,” he cursed, tugging Hurricane in the opposite direction. The miryhl shot him an aggravated look, before spotting what his Rider had seen. He growled and leant into the pull on his reins.

“My thoughts exactly,” Lyrai replied, scowling at Cumulo and the untrained girl upon his back. “This is no time for glory hunting!”

Cumulo continued his focused glide without glancing at them. Mhysra, however, looked over and calmly raised her bow. Then, as steadily as if she were on the practise field, she loosed.

It happened so fast that Lyrai barely ducked the arrow speeding towards him. Only when something screeched did he look behind. A kaz-naghkt clawed at its eye, barely a spear length from Hurricane’s tail.

A dark blur darted under the wounded kaz-naghkt, the Rider on its back ripping open the creature’s chest with a neat sweep of his sword.

The miryhl ducked out of the way of the falling body and Dhori grinned at Mhysra. “Great!” he called. “Aim for the chests. Only a heart blow will kill them.” Then he was gone.

Stunned, Lyrai turned back to Mhysra – she had her hands over her face.

And he’d thought she looked calm. It was so absurd, Lyrai laughed. “You can use me for target practise anytime,” he called, as Hurricane swept past and dived back into the fray.

All comments welcome – and if you spot a typo, please let me know.
Thanks for reading!