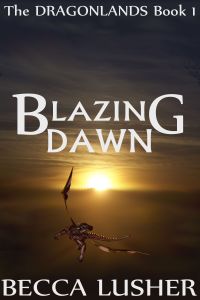 To celebrate the release of Blazing Dawn, and to make all the spamming seem worthwhile, here’s the second part of Chapter One.

If you missed the first part, you can find it here, where you’ll meet Rift Rider Lieutenants Nera and Anhardyne.

A fire dragon and a water dragon? What could possibly go wrong? ;D

Khennik kin Blazeborn Clan Sunlord sighed and rolled his eyes towards the ceiling. Ringed by hanging fronds of fragrant seisflowers, the sun was perfectly framed by the circular opening, pouring its life-giving warmth over his bare head. Seated in the brilliant spot cast upon the floor, Khennik had been deep in meditation, dreaming of his home far to the west, where the clouds were thin and the mountains dry. Every breath there tasted of dry heat, stoking the fire that ran through his veins, where to fly was to bathe in Father Sun’s glory.

“Elder B-Blazeborn?” The voice this time was much closer, even more timid than before and full of apology.

Khennik glanced towards the irritant with narrowed eyes. “What is it now, Mastekh?”

Mastekh kin Rainstorm Clan Flowflight sweated with nerves as he stood on the edge of Khennik’s precious sunlight. Barely past his change time, the youngster had only just mastered a human shape, though his skin was blue-grey instead of a more acceptable shade, his hands were clawed and he wore scales instead of clothes. Merely being in Khennik’s annoyed presence loosened what little control Mastekh had and a soggy tail uncoiled behind him.

Trying not to snap at such a poor showing of focus, Khennik closed his eyes again and lifted his face towards the sunlight. “You will have to work harder than that, wingling, before the humans arrive. Else you will unsettle them and be asked to leave.”

If it were up to Khennik the youngster would have been long gone. Whoever had decided to pair a nervous Rainstorm dragon with a Blazeborn elder, not well known for his patience, was a fool indeed. Yet it was a rule between the kins and Clans that youngsters had to gain experience with others outside their own, especially those opposed to their nature. To toughen them up, the Starshine elders claimed. Khennik thought it was all rather cruel, when he thought of it at all.

“That’s j-just it, Elder B-Blazeborn,” Mastekh stuttered, his voice turning bubbly – a clear indication that he was about to lose his hold on his form altogether and revert to dragon shape.

Khennik’s eyes flashed open in a glare. “If you’re going to liquidate, do it outside.” The only water he permitted in this sunroom was for the plants. Everything else took too long to dry, and if he had to see to it himself the flowers might not survive. Which would put him quite out of temper.

Gulping nervously, Mastekh clenched his clawed-hands together and stared at the ground for a long moment. A shudder rippled over his scales and skin, the blue shade darkening as more water dripped from his nose and elbows, but he finally mastered himself.

“Ap-p-pologies, elder,” the young dragon whispered, lowering his head as if expecting a beating.

Khennik had never been one for physical punishment. He sighed. “Fetch a cloth and clean up after yourself, then leave me be. I have too much preparation to do for the arrival of our human guests’ tomorrow to be disturbed now.” If meditating and brooding over his poor fate could be considered preparation. Which in Khennik’s book it definitely could.

Humans were useless. Once they arrived they would need constant supervision and support, leaving him no time for anything other than irritation at their hopelessness. A foolish task for a Blazeborn, especially one with as important a mission as his.

“What?” Khennik snarled, losing patience as he opened his eyes yet again. “Stop this brookish babbling, Mastekh, and speak clearly.”

“The h-humans are er-er-early, elder,” the Rainstorm dragon bubbled in a rush. “By a whole d-day. They’re h-h-here. Now!”

With that Mastekh lost all control, bursting out of his human form and leaving a large, soggy dragon drooped pathetically across the floor and a completely sodden elder glaring at the mess.

Or click here to find out where you can buy it!