I think it’s time I finally admitted that plans and me this year just aren’t working. It’s only taken me ten months, but still, it’s progress. Of a sort.

Since my last update and discussion of plans in August’s progress report, I have released Storm Rising, finished the Dragongift serial and… done nothing much else. This is not for want of trying, but real life keeps intruding. Like having the new bathroom fitted and it taking two weeks(!). It’s a very nice bathroom and I’m happy with it, but the disruption was not great.

However, the really big change came in mid-September when I sadly lost my collie, Beren. He was fourteen years old and he’d been sick on and off since Christmas, but it was still awful when I had to choose to let him go. All his life he’d been really healthy and hadn’t shown his age. In fact, he looked great and was still bouncing around like a puppy. But in early December, my little lab x had a stroke and had to be put to sleep. Thyme and Beren had been lifelong companions and partners in crime, and not barely two weeks later Beren was at the vets and I really thought that was it.

He pulled through that time, but he was changed. He was an old dog now, finally showing his age. He was still bright eyed and affectionate, loving his walks and playing, but he was stiffer and slower, his walks got shorter and shorter, and he started falling sick. We muddled through together right up until his fourteenth birthday, then he could no longer keep any food down and stopped trying to eat altogether. I didn’t want to lose him, but I wasn’t going to let him suffer. And, since I was convinced he wasn’t going to make it at Christmas, at least I got nine more months with him.

The next few weeks were a struggle. I’ve lost three dogs over the last eighteen months, because they were all getting old at the same time, and I really, really miss them. I still have two, but Willow is fifteen and I have no idea what is still keeping her going since her back legs are so wobbly you’d think she was going to fall over any second. But she doesn’t and her appetite is enormous. Still, she can’t last forever and I didn’t want my other dog, Mushu, to be alone. So I started looking for a puppy.

Not being at all sure how Mushu would react to a new dog, I wanted something young that she could get used to, which ruled out rehoming – most of which weren’t suitable anyway because they needed to be only dogs. I wanted a male, because I miss Beren and Woody. I preferably wanted something with either collie or lab in it, but I really didn’t want a pedigree because the only dogs I’ve had with life long health issues have all been pedigrees. I knew what I didn’t want, but was open to any interesting ideas as long as it would be quite big. Yet, despite there being ridiculous amounts of pugs and French bulldogs, chihuahuas and spaniels, labs and various doodles (all crossed with mini poodles) available, nothing was suitable.

I looked and I looked and I looked, growing mildly obsessed and wishing I lived with my sister in South Wales because there were some amazing sounding puppies up there, but I didn’t want to spend more than two hours in the car bringing the puppy home – for its sake as much as anyone else’s. Although, after three weeks, I was starting to get desperate and contemplating searching much further afield.

But there was one litter I’d seen advertised a few times. Border collie x New Zealand Huntaway. I’d never heard of a huntaway, so I looked it up and was intrigued. They’re sheepdogs that herd by barking, which could be a worry although they can be trained when not to bark, and I wasn’t sure I wanted anything that lively anyway, despite Beren having been no trouble at all. It was a farm litter too, which can have their behavioural quirks – sometimes for the good, occasionally for the bad. They were a curious looking bunch, with a couple of blue merle puppies that looked like little snow leopards, a couple with blue merle coats and tan patches, one brown and tan and one black and white. But I put them out of my mind, because I was sure something else would come up.

It didn’t. The collie/huntaways were updated with newer photos. I dithered, then said no, because crazy collies need so much exercise and there’s the barking thing and they probably didn’t have that much huntaway in them anyway.

His name is Bruin and he’s half collie, half huntaway and pure mischief. His favourite things are playing with Mushu, eating my shoes (preferably when still on my feet), chewing rocks and sticks and furniture, and barking at Willow.

He’s ridiculously cute and so much fun. At first he wasn’t toilet trained at all, but he’s getting there, and best of all he’s slept through the night without any crying, barking or whining since day one. He kicks up a ridiculous fuss during the day when I leave him downstairs, but I can cope with that. 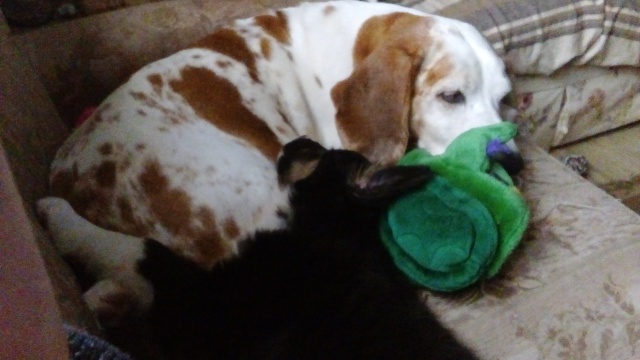 He’s growing so fast. He’s not even twelve weeks old yet and already as tall as Mushu, although it’ll be a while before he’s as long as her mutant Bassett body. He can sit on command and does a fantastically flamboyant flounce when asked to lie down – one leg up and flump!

He fits in perfectly.

And although there are still moments and days when I miss Beren and Thyme so much it makes my heart hurt and things hard to get through, I love my newest little monster and I already can’t imagine life without him. And I don’t think I’m the only one.

More chatter about books and NaNo and stuff to come soon. For now, I hope you’re all well, my lovelies. Merry Monday!

Indie author, book devourer, writer of words, dreamer of dreams, currently enthralled to dragons with a side order of Things With Wings.
View all posts by Becca Lusher →
This entry was posted in A Bit of Me, Updates and tagged My Critters, photos, real life. Bookmark the permalink.