I’ve been feeling a little off-kilter for the last few weeks. Reading hasn’t been the joy it usually is, writing became a bit of chore, I had a run of headaches and was generally feeling rubbish.

This isn’t unusual for me, I’m used to these feelings cropping up sooner or later, but it’s the first time for a while that all things lost colour all at once. I felt a bit like the bluebells in the bottom right hand corner of the top photo, trying my hardest to keep going yet somehow getting overtaken by the super-fast bracken that sprung up from nowhere! Or maybe the oak tree, stretching all my limbs in one direction only to find the sun has shifted to rise behind me.

It’s not so terrible a feeling, and is mostly brought on by tiredness and a general feeling of being run down, but I wasn’t expecting it all at once so it knocked me back a bit.

Sometimes it’s a simple thing to fix – a good walk, usually on Dartmoor, often works wonders. So a couple of weekends ago I went back to the Dart Valley, since the weather was showery and I didn’t want to get caught out somewhere high if it turned nasty. I was half-hoping that the foxgloves would have come out.

Wow, was I wrong. Turns out the bluebells are going stronger than ever and the undergrowth has exploded! Here are some pictures from 15th May next to my last visit on the 12th June. It’s like someone jammed the grow switch on or something. Moss, ferns, leaves, go! 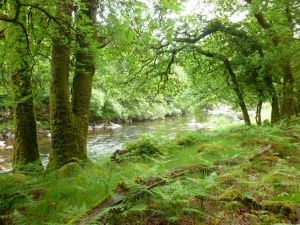 It was lovely down there, and this time there weren’t a bunch of campers cluttering the place up so I could get much closer to the water. I’m not very good at sharing my favourite spaces with other people, but one of the best things about this place is that a lot of people don’t realise it’s down there, so it’s pretty peaceful and quiet – when the campers aren’t about anyway ;)

It was even lovelier when the sun poked its head out for a bit.

I caught a faint shower on the way back up the hill, but by the time I reached the top the sun was blazing and I was startled by a bunch of sheep who looked very unimpressed by me. I would have taken a picture but the ewe was looking at me funny and I didn’t want to disturb the lambs, so I left them to it and decided to clamber down a very (very) steep slope to see how far along the Venn Brook (which flows into the Dart) I could get. I’d seen a picture of a waterfall down there and wanted to try and find it. Well, I think I did, but I wouldn’t recommend it. There’s not much of a path and I didn’t pick the best time to walk it, since everything is growing like mad. Maybe I’ll try again in the winter.

Still, it is very pretty down there. A proper fairy glen.

And the climb back up was rough. I followed a bunch of hoof prints from the Clydesdale Heavy Horse Adventure rides, and I felt so jealous! I went on a ride with them last year and it was amazing, but I really wished I had a horse, any horse, when I was scrambling back up that slope. Served me right.

Sadly the walk itself didn’t sort my head out as much as I hoped, but putting my fiction reading aside for a few days and immersing myself into some non-fiction definitely helped out on that score. On the writing side, I abandoned everything at the end of last week and watched How to Train Your Dragon 2 instead. I hadn’t seen it for ages and it was a perfect tonic. Add in a few naps and I seem to have recovered my writing zest too. I’m now closing in on the end of the Viscount book.

At least I was until the characters decided to take a road trip. Argh! Don’t they know how difficult it is to find and read Regency era road maps from Devon to Norfolk on my phone?
I also looked up the symptoms for syphilis, just to stop my Google search history from getting boring. It’s probably best that cocaine usage post-dates this era, else I’d have that research on top, with a little opium addiction for extra colour. At least it isn’t poisons or the best natural treatments for burns and bruises or how long it actually takes to throttle someone this time.

I’m not a serial murderer in training, I promise. It’s all research – er, not that kind of research. Oh, never mind!

Ah well, at least my equilibrium is mostly back, so that’s gotta be good. Even if Google is looking at me funny.

Merry Wednesday, everyone, I hope you’ve been enjoying Midsummer, or if you be on the lower half of the world, I hope you’re enjoying being halfway out of the dark!

(And for those who are interested, new dragons can be found on Starlight Magpie. Along with an Ivy Witch and hares on rocks. If you’re curious, go and see.)