Seasons Greetings and Midwinter Merriness, to one and all! 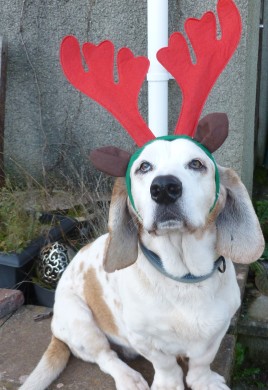 Mushu was born to pose. 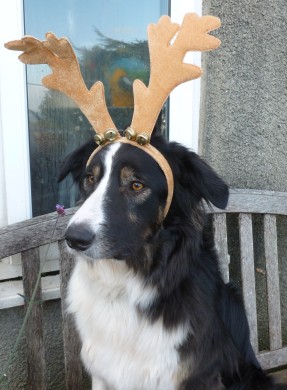 Bru waits for Santa! (While behind him is a lesser-spotted Naldi bird)

Rowan still isn’t sure about this photo thing…

With tails wags and cuddles,
Dog dances and cheer,
The Reindogs wish you
A Happy New Year!

This isn’t the end of the Overworld, of course – I haven’t finished the Dragonlands series yet, and I’ve already got a novella idea about what happens with certain characters after World’s End – but this plot arc is done. Done, I say!

Which is pretty big, because I’ve been playing with the Wingborn/Rift Riders stuff since 2003 after I had my first dream about a girl and her dog in a skiff being dragged across a sea of clouds by her giant eagle. Things have certainly changed a lot since then, and there were years when I didn’t touch the books, but still, the ideas and characters have been with me for a while, so it was nice to finally get to the end of it all.

I am exhausted. Although that might have more to do with what I did with my celebratory morning off…

Serenaded by skylarks, watched over by buzzards, surrounded by primroses and the first budding leaves on the alder trees, with bursts of sunshines overhead, I do believe that spring might actually be here.

I hope your week has been going as well as mine.

I broke my brain, but I win! The Icarus Child is done!

I’ve written 13.5K words today. Starting at 8 ish. I broke off to watch Tim Peake rocket up to space, then had to break later on to drive my mum somewhere because of rain, but otherwise I powered through on a diet of Galaxy chocolate, copious amounts of water and Ori and the Blind Forest soundtrack (and a couple of others – I will have to talk music sometime).

It makes no sense. I don’t even care. It is done! Book is finished! I’m not even going to touch it until the new year.

Now I can catch up on my reading, put up decorations, wrap presents, see family and look after the dog who has an ear infection and a lip infection and all kinds of skin infections (apparently, though he seems fine, but the vet says, so *shrug* and he’s a foolish pedigree), and probably sleep a lot. Because it is December and it’s wet and we’re not quite halfway out of the dark yet.